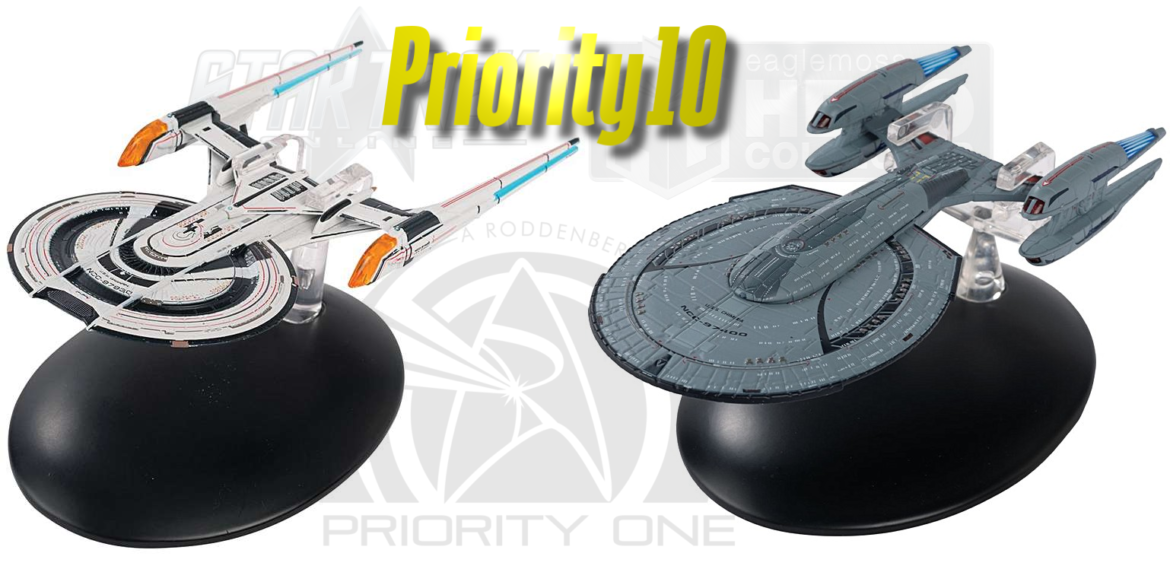 This episode of Priority One is brought to you by Eaglemoss Hero Collector and the brand new Official Star Trek Online Starship Collection.  Check out all the exclusive ship models – including the U.S.S. Gagarin and the U.S.S. Chimera – at priorityonepodcast.com/ship nd use code PRIORITY10 at checkout to get 10% off your purchase with FREE SHIPPING.

This week on Episode 482 of Priority One --- We ‘Trek Out’ Star Trek’s longevity according to Franchise Captain Alex Kurtzman, and Lower Decks showrunner Mike McMahon takes a victory lap after the season 1 finale! In Star Trek gaming, we dive further into House Shattered and STO Devs drop in on the team to say "Hello!" Then, Gray takes us down memory lane with another RetroTrekGame review followed by our review of the Season Finale of Lower Decks.

This Weeks Community Questions Are:

CQ: Do you believe the Star Trek Franchise is diverse enough to avoid ‘Franchise Fatigue?

Alex Kurtzman is a busy man. Other than his work on “The Comey Rule” and the upcoming “Silence of the Lambs” television adaptation titled “Clarice”, Kurtzman also works on a little franchise called Star Trek. This week, Kurtzman sat down with the Hollywood Reporter’s “TV’s Top 5” to discuss everything he’s been working on - and while we may or may not be excited for his other projects - well...let’s just say we aren’t partnered with the Thomas Harris Podcast Network.

Kurtzman spent a lot of time talking about Star Trek: Discovery, which is of no surprise - the third season’s premiere is set for October 15th. When asked about how long the series would likely run, Kurtzman was frank in both the series' praise and direction - as well as in the Showrunners commitment to keeping Trek fresh.

Along those same lines, Kurtzman noted that he had plans with ViacomCBS for Star Trek that reached - currently - to 2027. When asked whether he was afraid of over-saturating the market with Star Trek, Kurtzman expressed that he felt the world needed the franchise, and that diversity in programming was the key to keeping it relevant. 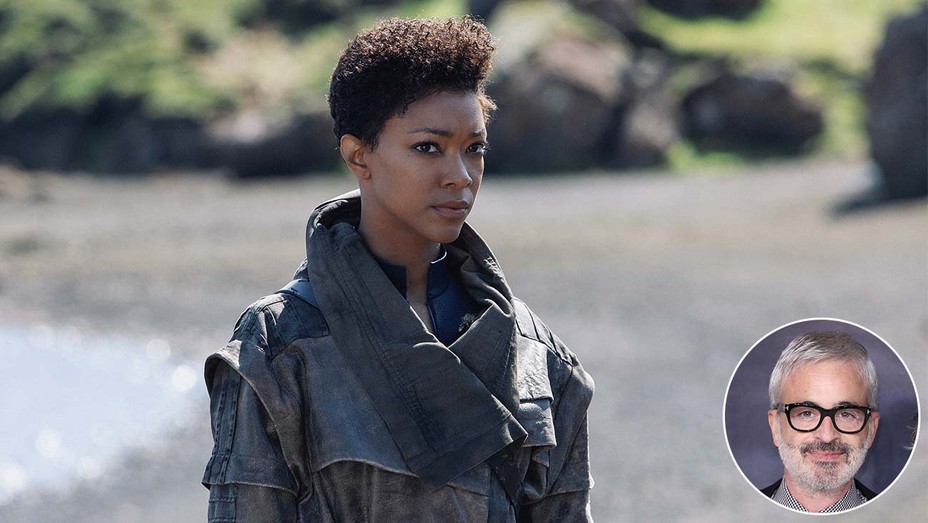 Last week, in episode 481 of Priority One, we talked about the New York Comic Con Star Trek happenings. But if you’ll remember, we skipped coverage of the Lower Decks panel because it was spoiler heavy. You’ve had a week to catch up, but if you still haven’t watched the season finale of “Lower Decks”, skip to Star Trek Gaming! -- SPOILERS INCOMING --

During the Comic Con panel, Showrunner Mike McMahan and the cast of “Lower Decks” talked about what happened in season 1, and where their characters were heading for season 2 - sans, sadly, Fred Tatasciore’s Lieutenant Shaxs. There were some fun ideas on how to bring back the battle-hardened Bajoran - and discussion on whether he was really dead - or just mostly dead. About half way through the panel, the cast was joined by series special guest Jonathan Frakes, and that’s when things got predictably spoiler-y. As it turns out, Frakes spoiled plot points for co-star Jack Quaid before the show even started.

Of Riker, and his appearance on Lower Decks, Showrunner Mike McMahan stressed the characters' fun attitude and joy.  And if you’re concerned that Boimler will mysteriously find his way back to the Cerritos for the Season 2 premiere, fear not. He will be on the Titan.

This week, Mike McMahan took a Season One victory lap - of sorts - hitting Youtube, Variety, and Inverse to discuss what happened on and off screen during “Lower Decks” first season.

On Youtube, McMahan explained his thoughts behind using the Pakled as the finale’s “Big Bads”.  He continued those musings with Variety, before moving on to spoilers - and cheeky possible-spoilers. ”We’ll see the Titan next season because Boimler is off the Cerritos, and we’ll be seeing Capt. Riker again as well. Boimler has been talking about moving on to bigger and better all first season, and now we’re going to see what happens when he gets what he wants.”.

McMahan said Councilor Troi would NOT make in appearance in Season 2. But when asked if OTHER TNG Alumn would join, noted, ”That, my friend, I will not tell you, I would say, feels like a pretty good chance of it.”

McMahan told Variety that the second season of Lower Decks would dive deeper into sexuality - Mariner’s specifically - saying ”For me and for the writers as we were making this, we didn’t intentionally mean for anybody to be strictly heteronormative or straight or cis. Every Starfleet officer is probably at the baseline bisexual, in a way. That being said, I am not the most amazing person at writing those kind of stories. I think we get a little bit better about it in the second season.”

Heading to Inverse, McMahan may have answered a question we’ve asked on Priority One. Could Lower Decks be an off-kilter representation of the Cerritos’ adventures through Starfleet gossip? ”If you’re in Starfleet, and all this stuff has happened, it would be like if you were in the military now, and you were reading about — or hearing about – [real events] either officially or word of mouth through people who have been on ships, or people catching up. There are so many people on these ships, of course they’re going to talk to each other. They’re going to take real life events and put those into media. I think what I’m trying to say is there is no one unifying theory of communication. To me, it’s more that there’s going to be mosaic of communication. There’s things that are going to be popularized, there’s things in the news, there’s things you’ll learn at Starfleet academy there’s going to be stuff you’ll hear rumors about. It’s out there and it’s going to be known.”

If you’re wondering about the “First Contact” uniforms making an appearance on Lower Decks, McMahan had an answer for that too! ”I’m very fascinated with the idea that we have replicators [in Star Trek] that can make anything. But who’s designing that stuff? It becomes like intellectual items, like why aren’t they all eating Lincoln’s last meal? The more you look at it, some ships would have different stuff, which is why you’d want to get the thing with the purple stripe on it, which goes all the way down to uniforms. I mean why is Starfleet even in uniforms? It’s not to make them camouflaged and they’re not strictly military. It’s representational of who Starfleet is.” 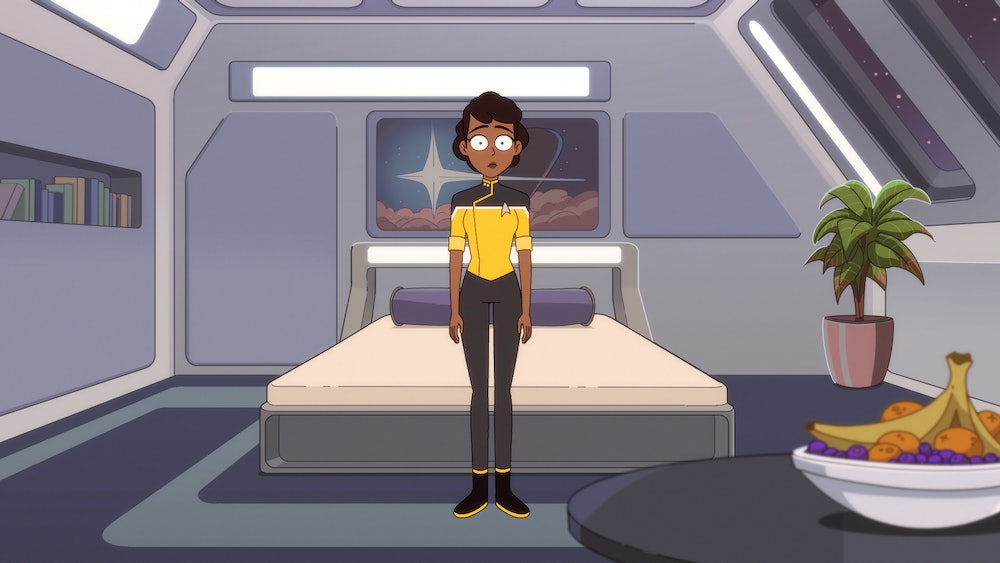 We’ve got some breaking news tonight, thanks to our Associate Producer Shane Hoover. According to NBC news affiliate Las Vegas 3, the official Star Trek Las Vegas convention has been cancelled. From the website, "Creation Entertainment, the company that brings the Trek convention each year, has announced that the December 2020 show is not going to happen due to pandemic-related reasons. The Star Trek convention will resume next year in Las Vegas on August 11 - 15 at the Rio.”

Though we couldn't find any OFFICIAL release from Creation Entertainment at the time of this writing, their previous STLV 2020 page is no longer accessible. Instead it gives way to the 55th anniversary of Star Trek - and creator Gene Roddenberry’s 100th Birthday - in 2021. Keep your ear right here for more on the news.

Venture(Beat) into the Final Frontier

Newer captains may find it hard to believe (and older captains harder to accept), but Cryptic Studios opened its doors before the NX-01 first left spacedock. This year Cryptic celebrates its 20th anniversary this year, and last week tech business magazine VentureBeat published an interview with Cryptic CEO Stephen D’Angelo.

In the interview D’Angelo shows off his toy cabinet (he has a Galaxy-X model, not that we’re jealous or anything), and speaks about thirteen years with a game company driven by outside IP. Saying specifically of Star Trek Online,  ”Star Trek is a universe more than a storytelling style. We’ve tried to, like I said, give people an experience in that universe that captures the look, the feel, and the stories, but going for the diversity the universe offers”. D’Angelo also talked about being STO’s executive producer when it went free-to-play, the changing nature of the game’s playerbase, and the company’s history in the MMO space as a whole. 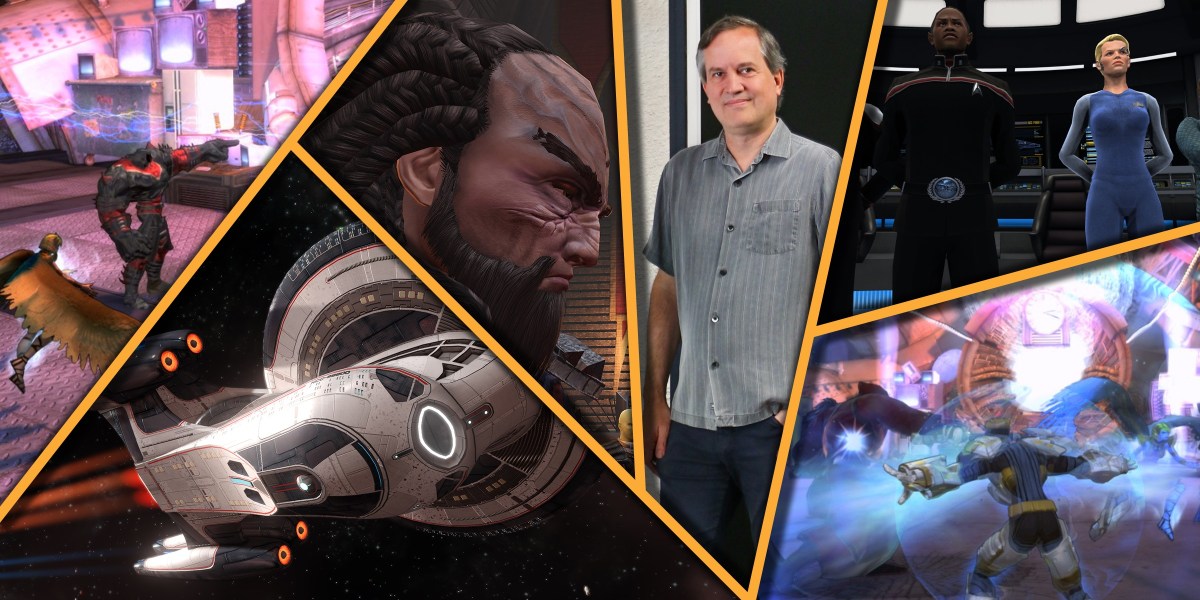 The Titan Reprises A Familiar Tune?

Captains, be advised: the Trek nuggets in this segment may spoil your dinner. Proceed with caution. Last week’s season finale of Star Trek Lower Decks captivated us with drama, tragedy, callbacks, comedy–you know, all that jazz. While the show taketh away (RIP Shaxs), it might also giveth STO players something they’ve wanted for a very long time.

On October 9th, the official STO Twitter account dropped a screenshot of the in-game Titan and quoted its swingin’ captain’s call to action. Admittedly, this doesn’t explicitly say what is going on with the Titan in 2411. Cryptic may have simply been capitalizing on the ship’s newfound public awareness. However, we had it from Ambassador Kael himself that “there’s something coming from Lower Decks soon-ish,” but he couldn’t tell us about it lest he ”spoil a surprise in the last episode.” It’s hard not to imagine a T6 Luna-class is finally in the cards, and  its holodeck has the Bourbon Street Bar already loaded. Or maybe we’re getting little horga'hn ground devices for the upcoming Tulgana IV map.

Hopefully you’ve had a chance to play House Shattered’s new TFO, “Synth Wave,” since it was released last week. If you have, you might've noticed some of the escaping ships really seem to like the Utopia Planitia Starbase, because they never leave it. On October 9th, the official STO Twitter account also confirmed that ships were getting stuck within the starbase, which means they could never leave and the TFO could never end. Cryptic says it’ll fix the issue with the October 13th patch, and the event will be extended by another week to make up for the bug. Apparently you shouldn’t let homicidal AIs write your Holodeck code.