This week on Episode 518 of Priority One: Comic-Con@home brings us new trailers for Star Trek: Prodigy and Lower Decks, and Saru and Stamets look ahead to season four of Discovery.  In gaming news, we go back and forth on the Courage-class coming to Star Trek Online, and some new shiny textures for your favourite Romulan Captain.

As we anxiously await the premiere of Season 2 of Lower Decks, we were treated to a brand new trailer last week during Comic-Con@home. Based on the trailer, Season 2  has all the things we loved in Season 1 plus so much more. How much more? The best villains! Including Cardassians, Pakleds, Ferengi, Nauciscans, some giant slime monster and the incomparable Jeffrey Combs makes an appearance as an evil computer. We also see a new Tamarian crew member who had this to say when welcomed to the bridge: “Rapungee - when he joined the Seven.”

Tom Paris also shows up in Season 2...in commemorative plate form, though. Also, an interesting side note in the news: Robert Duncan McNeill was invited to reprise Tom Paris for Season 1 of Picard but, due to scheduling conflicts. he was not able to make it work. So maybe we’ll see more Tom Paris at some point. Season 2 of Star Trek: Lower Decks starts August 12 on Paramount+.

But Lower Decks wasn’t the only Star Trek series to get some Comic-Con attention. We were also treated to our first look at Star Trek: Prodigy! In the 52 second trailer for Prodigy’s inaugural season, we’re introduced to the main cast: Dal, Gwyn, Zero, Rok-Tahk, Murf, and Jankom Pog, The main cast also features the stunning new-to-crew U.S.S. Protostar (which looks like a cross of the Intrepid- and Rhode Island-class) and the timeless Captain Katherine Janeway–who reminds us that ”we’ve only just begun.”

During the Comic-con@home panel, the creators, director, and cast–including Star Trek royalty Kate Mulgrew–joined the ever-entertaining Jerry O'Connell to discuss the newest Star Trek series. EP Kevin Hageman pointed out that this would be the first Star Trek series ”that’s actually going to be seen through the eyes of characters who are outside of Starfleet.”

In discussing Prodigy’s place in Star Trek mythos, the Hageman brothers recognized that this would be the “Little Brother or Little Sister” member of the franchise, but wanted to “punch up.” Kate Mulgrew reiterated the sentiment, saying “Children are very astute. You’ve grasped an essential component of the childlike imagination, which is extraordinary perception. They need to be grounded while taking flight at the same time. And this–you have achieved.” The trailer is a must watch, and the panel is super-entertaining and informative.

Stamets And Saru In Season 4

Everyone’s favorite Kelpien [the other white meat–Ed.] has been on the interview circuit in the past couple of weeks, with Doug Jones talking about the release of Discovery Season 3 on DVD.  In an interview with SYFY Wire, Jones spoke about Saru’s heartbreak at the revelation that a fellow Kelpien was responsible for the Burn. He also confirmed that filming on Season 4 continues in Toronto and, even though Saru’s left the command chair, he still has plenty to do. 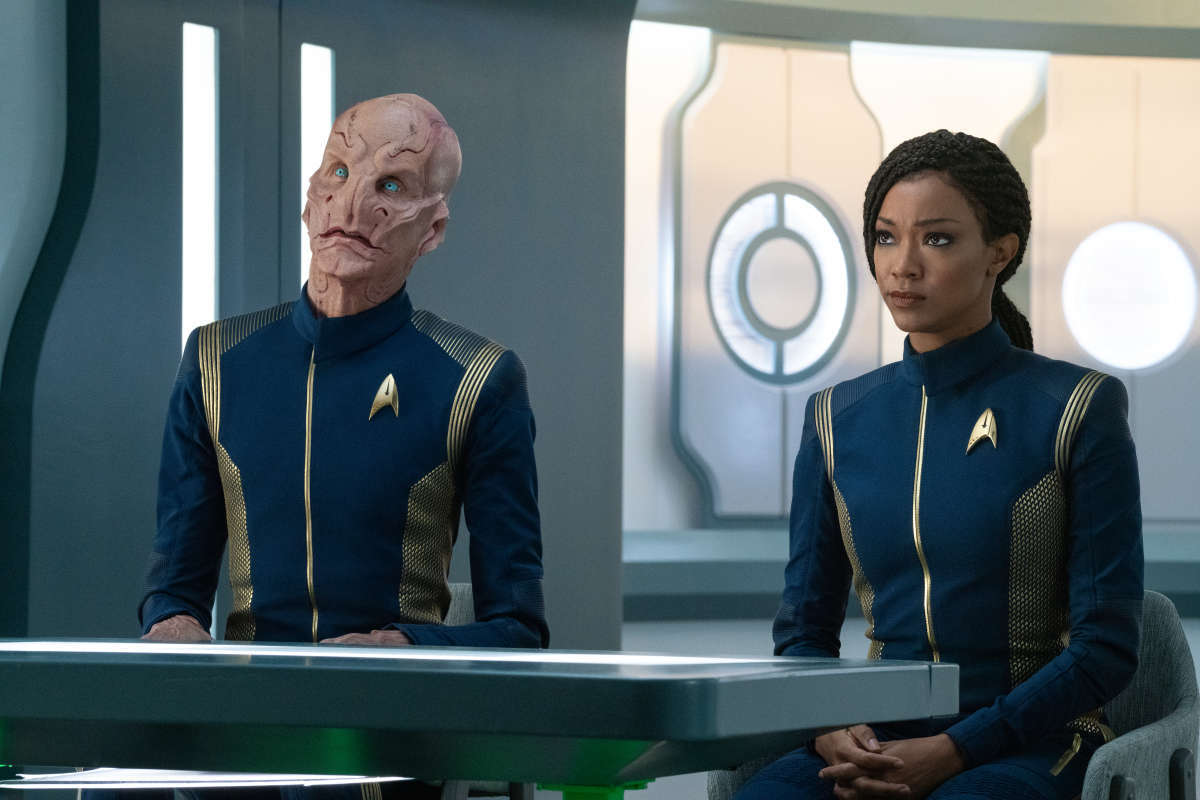 “After we got home to LA during hiatus last year, I called Michelle Paradise myself and said, 'Should I expect to go back for Season 4? Because, they left me on-camera teaching Su'Kal the ways of the Kelpians.’ She said, ‘Oh, no, you're back. You're back.’ But the question will remain that Starfleet does not strip you of your rank, so I am still a captain. Where do they plug me in? That's the question.”

In an interview with Screen Rant, Discovery actor Anthony Rapp spoke about the cast and their Dungeons & Dragons sessions, and rejected claims he'll become the series villain. You may suspect that’s where the relationship is going–at the end of Season 3 we saw Paul Stamets not being particularly friendly with the newly-minted Captain Michael Burnham.

When you find out you have to be the party healbot. Image: ViacomCBS, via ScreenRant

Rapp was quick to shut down the villain rumors. “No, no. He's like a consummate professional. He hated [Captain] Lorca but he still did his job. And he doesn't hate Michael. He was just hurt. It was a different situation. Ultimately, he's a smart person and understands [why Michael became Captain] but it still stung, the way that it happened.”

Courage Of Your Promotions

Star Trek Online continues to look to the future–or at least continues to look to Discovery when picking new promo ships. This week, the 32nd century Courage-class Command Science Destroyer joins the list of ships available as a R&D and Duty Officer pack reward choice. This ship switches from Science Mode to Tactical Mode by reversing direction. In Tactical Mode, you get access to a Commander Tactical station, the Coherent Integrity Projector Experimental Weapon is enabled and you get a boost to hull capacity. It’s a Science ship–but it's also a Destroyer so it’s equipped with 4 front and 3 aft weapons [or is it 3 front and 4 aft?–Ed.]. The starship trait, Directional Bias, provides bonus Exotic Damage or Healing when using bridge officer abilities based on where you are attacked. Overall, this ship looks to provide a lot of build options for those lucky enough to win one.

Now does that make it any easier to parallel park, though. Image: Cryptic Studios.

Starting today through August 2nd, the Freedom-class Exploration Frigate, otherwise known as the U.S.S. Franklin from Star Trek: Beyond will be available in the Lobi Store. Plus! Everything in the Lobi Store is 20% off. The ship’s unique console is the interesting VHF Disruptive Transmission. When activated, it will blast high frequency radio waves towards nearby foes, dealing significant electrical damage and boosts your turning radius while it’s active. And it can be equipped in any console slot, on any ship.

D’deridex? Don’t Mind If I Do

Some breaking news for Romulan ship fans [we know you’re out there–Ed.]:  the D’deridex and Scimitar classes are freshly remastered starting today. Just when you were getting bored with those ships’ looks, they go and make them all shiny. Thanks to Donny "Viper" Versiga, a ship artist at Cryptic for posting some excellent before and after images–it’s so nice to see those ships get some love.

Speaking of Donny, he recently spoke with the folks at MassivelyOP about ship design. They covered off his favourite captain (Kirk) and his favorite starship (Connie refit) in short order, then went on to talk about the design process for Star Trek Online. Donny explains that fresh designs are from the incredibly talented Hector Ortiz, with as many as 20 designs put together as the team refines the looks of a particular ship. 3-D models are created, then once the final ship design is selected, that model is sent to the Ship Team to build.

so i herd u liek starships. Image: Cryptic Studios, via MassivelyOP.

He also spoke about the updates to older Starship models, which has become a large part of the game. Donny explains that as PC/console hardware power has increased over the years, the amount of detail STO can provide per ship has increased, sometimes three times as much detail as was previously seen on starship models.  It’s a great look behind the scenes at the process.