This week on Episode 510 of Priority One: Star Trek Voyager could have had a much different endgame; the Section 31 spinoff series is still in the works; and Evil Picard is gunna get you in IDW’s new Mirror Universe series. In Gaming, Star Trek Online wraps its year-long Klingon Civil War saga.

CQ: If you could change one thing about the Voyager finale, what would it be?

Abandoned ‘Star Trek: Voyager’ Finale Ideas Could Have Given the Sendoff It Deserved

It was a night when the question that had plagued fans over the course of seven years would be answered - will Voyager return home in the series finale?

The feature-length final episode “Endgame” aired 20 years ago on May 23, 2001, and this week the series milestone was celebrated, commemorated and dissected.

The Hollywood Reporter spoke with many of the cast and crew discussing the potential finale ideas that were left mostly in the writers room.

Suggestions included killing off Captain Janeway or Seven of Nine, reverse assimilation of the Borg, and the idea that Endgame could have been a mid-season episode to allow for the crew to explore returning home to the Alpha Quadrant. 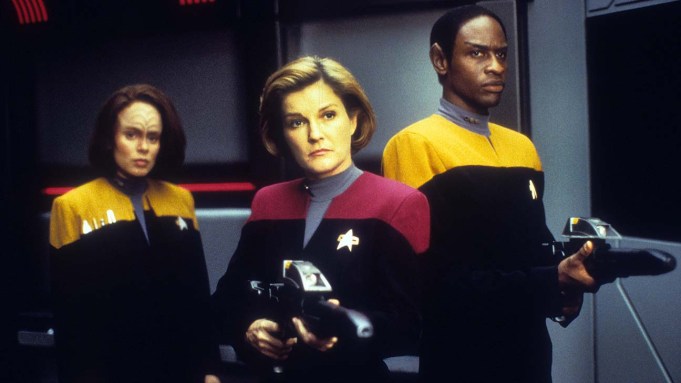 Everyone’s favorite Klingon-turned human-turned Section 31 agent, Ash Tyler, has been in the news this week discussing the Section 31 spinoff, and it turns out details are… few. To the point of… mysterious.

Speaking with Digital Spy this week, actor Shazad Latif talked about the spin-off series currently being up in the air due to actors’ schedules.

"It's just been slight yeses, slight questions, but I've no idea. I think it's down to people's schedules. I spoke to Ethan Peck briefly the other day. He's started the other one [Star Trek: Strange New Worlds], and that's about it."

The only other details we have come from Alex Kurtzman, who was more hype-man than detail guy. Kurtzman said the show is well on it’s way and the writers have put together a great script as well as a Section 31 writers room. All other details are shrouded in a veil of secrecy.

It’s one aspect of the Star Trek franchise that was never delved into in the The Next Generation tv series.  The Mirror Universe.

Thankfully the folks at IDW comics have taken the dagger and stabbed with it. Repeatedly. And explored the world in the 2018 series “Mirror Broken”.  The series saw a frustrated and aggressive Captain Picard in command of the Stargazer. The crew, including Inquisitor Deanna Troi and a Borg-ified version of Data, worked towards destroying and salvaging Cardassian and Klingon ships for profit and maintaining the borders of the weakened Empire. Eventually Picard’s frustrations and ambitions led the Captain, complete with goatee, to steal command of the Empire’s newest Galaxy-class warship from Captain Jellicoe.

Now the repercussions of the not-so-good Captain’s actions will be explored in “Mirror War”.

In the nine-part series, evil Picard will face the wrath of the Emperor for his crimes. Why is the Emperor angry at Picard? We’ll have to wait and see.  The Mirror War will also be complemented by four tie-in one-shots, each of which will follow an evil version of a prominent Next Generation character, beginning with Data. 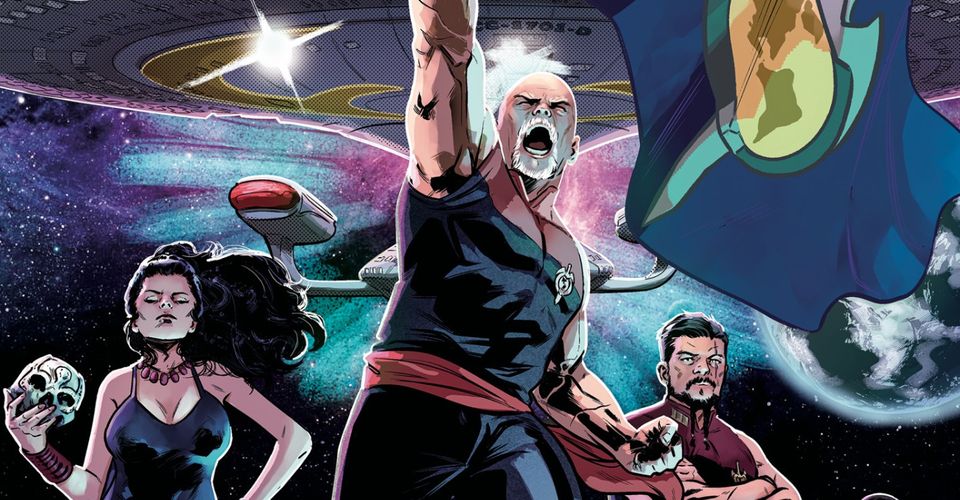 Now, here are a few headlines that we didn’t discuss but might interest you. Links, of course, will be in our show notes!

Hero Collector, the maker of everyone’s favorite Star Trek model collection, is joining with Star Trek Online to celebrate the arrival of STO’s new “Far From Home” lockbox. For starters, Cryptic’s lead Starship and UI artist Thomas Marrone has written an article for the Hero Collector website. Thomas offers insights into the challenges and intentions as the ship team brought the U.S.S. Discovery refit from screen to game. Be sure to Trek out Thomas’s article by following the link in our show notes!

But wait, there’s more! Hero Collector also announced a STO House United launch giveaway. Just by following their official Twitter account and that of Star Trek Online, and by retweeting the giveaway announcement, you can have a chance to win the Star Trek Online 2021 Anniversary Legendary Bundle! That bundle retails at 25,000 Zen, nearly $250. It includes four newly updated T6 Legendary ships: The B’Rel, the Excelsior, the Vor’Cha, and the Ambassador. And it includes a pile of other valuable game items and currency. We’ve certainly debated the cost and value of these bundles on the show, but nobody will debate winning the Anniversary Legendary Bundle for free! You can find a link to the giveaway announcement tweet right in our show notes, too. The contest ends and the winners will be announced on June 1st 2021 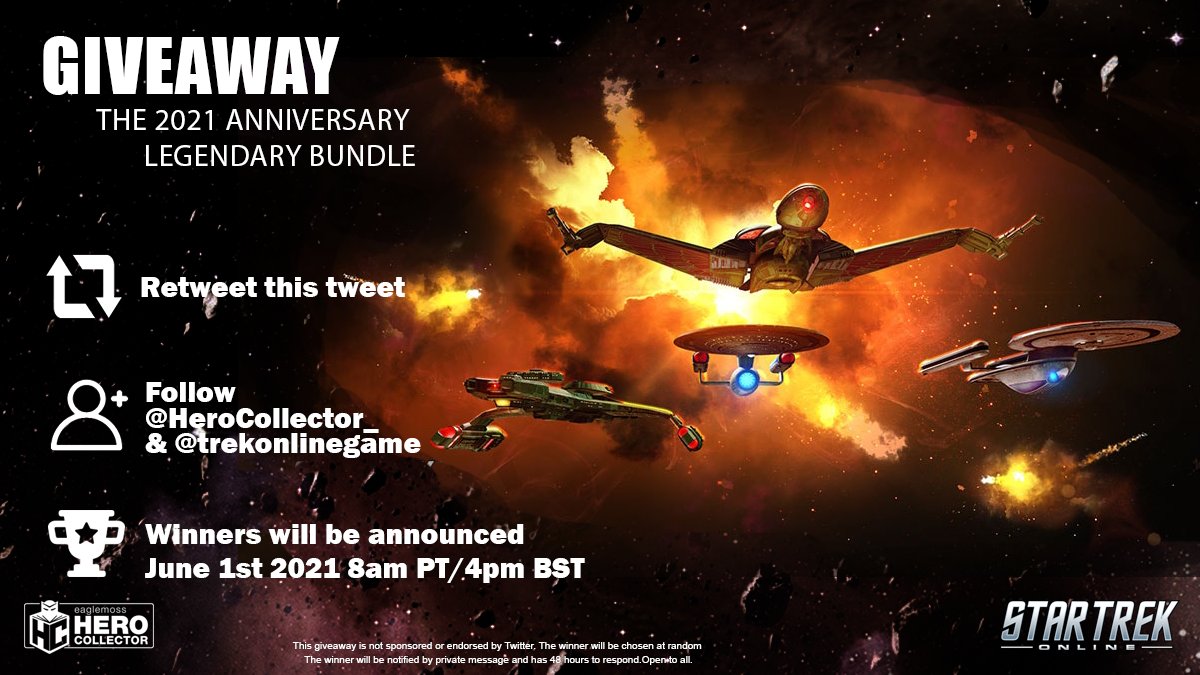 Captains, before we go any further, we’ve got a SPOILER WARNING. The following may spoil some of the story regarding the two newest missions to land on the PC version of Star Trek Online.

Now available to play on PC, the end of the Klingon Civil War comes to an end. The Mother of All Klingons, L’Rell continues to lead J’ula, Martok, and A’depta against Emperor J’mpok! With voice over performances by Mary Chieffo, J.G. Hertzler, & Rekha Sharma, this two-mission end will finally bring this year-long battle to an end.

Don’t forget, playing through some of this new content on a daily basis will earn you progress towards an Imperial Assault Ground Set. Just visit your EVENTS tab in your mission journal to learn about all the ways you can complete your daily progress.

A much requested quality of life improvement has arrived for players of Star Trek: Fleet Command. As expected following a recent announcement, a new Battle View mode has been added to the game. When the phasers start flying, players can click a conveniently displayed Red Alert icon to declutter the game’s User Interface. With less UI noise while in Battle View, you can more easily focus on handling those combat targets and making sure they discover just how cold space can be. To get a look at Battle View in action, hop on over to Fleet Command’s Twitter video of the feature via our show notes. Or just hop in the game and try it yourself.

In the long gone days of December of 2020, we last discussed JJ Abram’s Bad Robot Games studio. Back then they were hiring up important executives. Now they’ve announced the landing of more than $40 Million in financing. The investment comes from sources like Galaxy Interactive, Horizons Ventures, Iconiq Capital, and Tencent. Bad Robot Games CEO Anna Sweet released a statement saying the VC backing will be good as they look to “change the way people interact with and view video games.”. The company has announced that its first title will be an original Triple-A game developed internally, and with the collaboration of Bad Robot’s film, TV and animation teams. It’s not a lot of information, and there’s no hint yet that Bad Robot Games will be working on a Star Trek title. But the film studio has produced every Star Trek film since 2009, and we can hope for new games! They also produced films for that OTHER “Star” universe, but we won’t speculate about games for them!