This week on Episode 473 of Priority One --- We ‘Trek Out’ Star Trek’s cinema shuffling, Prodigy’s newest hire, and where our vagabond shoes WON’T be straying. In Star Trek gaming, our friends, the Women at Warp, share an invaluable resource for gamers, Timelines gets a Mega-Event, and Modiphius is raising a small fortune for Black Lives Matter.

CQ:  Would you rather see a fourth Kelvin film, Noah Hawley’s Pandemic Pitch, or a 2021 version of “A Piece of the Action”?

Werner Herzog once said “I WOULD TRAVEL DOWN TO HELL AND WRESTLE A FILM AWAY FROM THE DEVIL IF IT WAS NECESSARY.”. We Star Trek fans may need to get in touch with Mr. Herzog - because the Star Trek film franchise is in a bit of limbo.

On Friday August 7th, Deadline broke the story that Paramount’s newest film Captain - Emma Watts - was putting the Noah Hawley led Trek film on ice. According to the piece, Watts, who formerly ran many Franchises for Fox, was in the process of evaluating which Trek was most feasible for the studio moving forward. Hawley’s film was put on the back-burner in large part due to its plot. ”What we’re hearing is that [...] the Hawley pic  [...] calls for a new cast and might be about a deadly virus which might feel awkward given current circumstance”. The Hollywood Reporter’s sources confirm the rumor about the plot, adding “the virus wipes out vast parts of the known universe”.

So what’s next? Is it all bad news? Not necessarily. According to Deadline, Hawley’s film moving back may mean another oft discussed Trek film could move forward. There are two options, and we’ve discussed them both ad-nauseum. The first is Star Trek by Quentin Tarantino, which we’ll get into in a minute. The other, and according to Deadline the most likely of the three films to get made, is the formerly-SJ Clarkson-helmed Star Trek Kelvin IV. The script brings back the Kelvin Enterprise and her crew, as well as Chris Hemsworth as George Kirk. It was dumped in favor of Hawley’s pitch due to the high price tag that went along with bringing back the Kelvin-crew, but according to Deadline it ”might have the cleanest path toward a relaunch, with an emphasis on boosting overseas gross numbers which have never been the franchise’s strong suit. These decisions will take place over the next few weeks.”

So stay tuned for the next chapter of this ongoing saga!

We Learn More About Star Trekantino

Quentin Tarantino once said “THE GOOD IDEAS WILL SURVIVE.”. Let’s hope that’s true, because it feels like THIS idea has been around for a long time. THIS idea, of course, is the Tarantino helmed Star Trek film - Star Trekantino.

This weeks Deadline piece shed some light on the on-again-off-again film, including it’s feasibility and - more interestingly - its plot. ”Tarantino dropped out as director, but the project is still viable based on an episode of the classic Star Trek series that takes place largely earthbound in a 30s gangster setting — might serve the franchise best as Logan-like spinoffs when the core franchise has been revitalized.”. So, tarantino wanted a “Piece of the Action”?

Tarantino, as stated, dropped out as director, but still expressed excitement for the Michael L. Smith penned script. Tarantino told Deadline in January of this year ”I think they might make that movie, but I just don’t think I’m going to direct it. It’s a good idea. They should definitely do it and I’ll be happy to come in and give them some notes on the first rough cut.”

Hibon has been creating CG animation for video games, shorts, and movies since 2005; having most notably directed the animated “Tale of Three Brothers'' in Harry Potter and the Deathly Hallows – Part 1. Along with his Creative lead role, Hibon will direct and serve as a co-executive producer on the Hageman Brothers series. Ramsey Naito of Nickelodeon group said of the addition ”Ben’s contributions to the world of animation are immeasurable, and we are so lucky to have his vision and creative genius on Star Trek: Prodigy. As an incredible storyteller and a world builder with a distinct vision, his original approach paired with this beloved property will bring the characters to life in a whole new way,”

Hibon also expressed his excitement, saying in a release ”Getting the chance to work on an IP like Star Trek has been an incredible opportunity, particularly when partnered with the talented teams at Nickelodeon, CBS and Secret Hideout – who have been pushing the boundaries of what animation and serialized storytelling for younger audiences can deliver,”

For another look at Ben Hibon’s work, we suggest trekking out “Codehunters”. We’ll have a link in our show notes, but as a heads up Viewer discretion is advised.

Don’t want to be a part of it

Or not. If your vagabond shoes were longing to stray through the very heart of  the Javitt center this October - to celebrate ReedPop’s New York Comic Con 2020 - you’ll have to find another approach to melt away your little-town blues. New York Comic Con is cancelled - sort of.

In a statement released on their website, ReedPop said in part ”NYCC doesn’t stop just because we can’t do what we’ve done in the past. Instead, we look to the future: We may not be meeting in the queue hall each morning, but we’re excited to join forces with our sister event, MCM Comic Con in London, to bring you New York Comic Con's Metaverse, our new online portal dedicated to delivering pop culture experiences, right into your homes NYCC weekend, October 8-11. We are partnering with YouTube to bring to life four days of incredible content from the biggest studios, publishers and creators in the business.”

It probably comes as no surprise that the in-person event was cancelled - it would be more surprising, frankly, if they just pushed it back to - say - December. But it is disappointing. For a full list of guests, follow our link in the show notes

Star Trek: The Next Generation began the franchise’s new era with a damning observation: for all it protests otherwise, humanity is a grievously savage race. Our first contact in Bozeman, Montana might not have happened if the Vulcans spent five minutes with an Earth history textbook. But given the chance, would you undo humanity’s achievements to annul its sins? And would you want the RomuLannisters involved? No really, would you?

Star Trek Timelines’ upcoming Mega-Event, “The Capitoline Wolf,'' opens a strange new chapter in human/Romulan relations. During the Enterprise-themed event, players will see the history of an alternate Earth shaped by ancient Romulan influence–for good or for ill–and decide if humans should ever change. The event begins on August 13th with the “Cultural Property” Skirmish Event, with more details to follow. And look, we’re not saying it was aliens–Disruptor Beam is saying it was aliens. Captains, there are approximately 7 days left to purchase Modiphius Entertainment’s Star Trek Adventures RPG Book Bundle and support the NAACP Legal Defense Fund. As of writing the Bundle has raised $201,005.54 from 12,600 purchases.

Whether you’ve been playing Modiphius Entertainment’s Star Trek Adventures from the start, or you’ve just been enlisted to Starfleet by that Humble Bundle, you might be excited by some other news this week. At least, you’ll be excited if you’ve got Faith. Faith of the Heart. That’s right, the NX-01 Enterprise and her famous crew have joined Star Trek Adventures with the latest PDF add-on for the game. The new release includes character sheets for everyone from Captain Jonathan Archer to Doctor Phlox, plus Andorian Commander Thy’lek Shran. It also brings you the statistics for the NX-01 U.S.S. Enterprise herself.  So if your tabletop bridge crew is ready for a long road to the 22nd century, Trek out the new character pack.

Captains, this next Gaming News story isn’t about any new game or new event in one of our favorite games. Instead, we want to share a different story that came to our attention this week. It’s a story that we hope will be helpful to some of you, maybe even important.

As reported recently by Ars Technica, and shared with us by Sue fromWomen At Warp, a new type of text-based hotline has launched for gamers. It’s called the Games and Online Harassment Hotline, and their mission is to offer free emotional support and help resources to gamers and game developers struggling with the unique issues common to the industry. Initially conceived by Feminist Frequency’s Anita Sarkeesian, the hotline is solely purposed to offering a listening ear and support to anyone in gaming who might need it. As Sarkeesian puts it,  It's for people who make and play games. Streamer, competitor, press, fan, my mom who plays Candy Crush. There's no gatekeeping here, no test to get into our boundaries. If you're part of our space, we're here for you… Burnt out by crunch. Isolated, lonely, or depressed. Facing online harassment. Abuse. Afraid that you have caused harm and want a place to talk that out. Worried for your friends or colleagues. We're a space you can come to and talk some of that through.

If you need to talk with someone about struggles you’re experiencing in the gaming sphere, you can start by texting “SUPPORT” to 23368 anywhere in the USA. Between 4pm and 7pm Pacific, weekdays, they’ll reply to your text. After a few automated questions, you’ll get connected to a trained agent who will listen and offer helpful resources if they can. 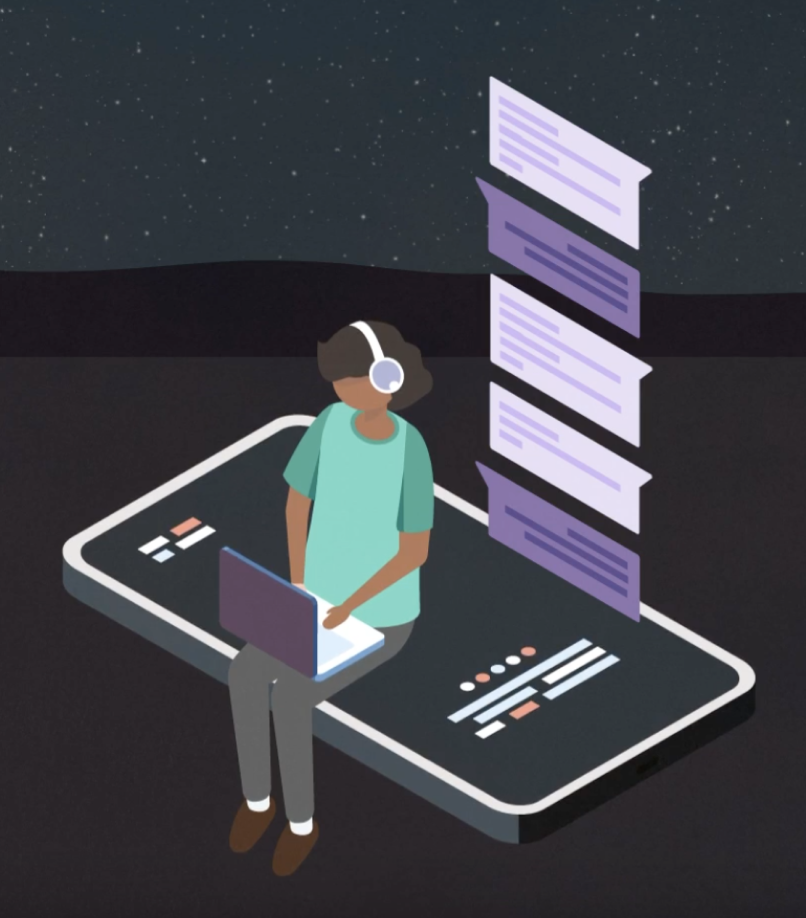