This week on Episode 472 of Priority One --- We ‘Trek Out’ what ViacomCBS has in-store for streaming, “Lower Deck’s” Future - or past, and T-Shirt subscriptions. In Star Trek gaming, the game’s afoot with Sansar’s Roddenberry Museum scavenger hunt, get your tabletop action on with an awesome humble bundle, and Timelines has an update.

CQ:  For those of you who will have the opportunity --- how will YOU watch the Thursday Premiere of Lower Decks? With Friends via Zoom? By yourself with a bowl of popcorn and your favorite beverage?

CQ:  Who do you think would be a good fit to return in animated form in Star Trek: Lower Decks.

'What's in a name? that which we call a rose By any other name would smell as sweet'. Or - - that which we call a recently-re-merged-corporation’s over-the-top subscription service by any other name would deliver as enjoyable an entertainment experience at a comparable price point?  Okay, so the idiom may not entirely work here… and the iambic pentameter was thrown to wind - but it does Segway very - VERY - poorly into our first story! On Wednesday July 29th ViacomCBS revealed more about their upcoming CBS All Access revamp, and in the process added 70 shows to All Access’ expanding catalogue.

President/CEO of ViacomCBS Digital and ViacomCBS’s chief digital officer Marc DeBevoise said of the move ”It’s the first big step to transform All Access into the super-service we’ve been talking about”.  Included in the addition are titles from BET, Comedy Central, MTV, Nickelodeon, The Smithsonian Channel, VH1, and TV Land - and Paramount Pictures threw in a few movies for good measure.

Along with the title roll-out,  the CBS All Access’ user interface got an upgrade, and we learned a little more about ViacomCBS’ strategy for the service. On exclusivity and distribution, DeBevoise told ViacomCBS Newsroom  “A lot of our competitors are being carried on one platform and not on another. We’re effectively across all the major platforms already. We are everywhere. We have millions of subscribers. We have a service with high engagement”. Translation, they’re more than happy to let you watch Star Trek elsewhere - as long as they’re getting paid.

So now the important stuff - what’s this going to cost us? As of right now DeBevoise doesn’t expect an increase with the rebranding roll out, due to hit sometime in 2021! Vague, but good news nonetheless.

Part of the problem with pre-recording a podcast is that - inevitably - important talking points today may turn out to be old news tomorrow. That COULD be the case with our next story - you’ll see what we mean in a minute.

On Monday August 3rd, entertainment website Inverse published a sit down with “Star Trek: Lower Decks”  show-runner Mike McMahon and star Tawny Newsome to discuss the upcoming series - set to debut on August 6th. The series, which takes place one year after the events of “Star Trek: Nemesis”, would presumably have reference to the Star Trek of that era. When McMahon and Newsome were asked about a possible Newsome/Mariner crossover to “Star Trek: Picard”, McMahon dropped a fully trekked nugget straight into the sauce. ”That’s interesting because we do have legacy actors who show up in the first season of Lower Decks and we have gotten to have a little bit of where are they now sort of vibe through a Lower Decks lens. But I gotta say, if anyone wants Mariner to show up on their live-action Star Treks, you’ve got to have Tawny”

So now the time paradox - this news on Friday August 7th may NOT be as great as it was on Tuesday August 4th because on Thursday August 6th one of those Legacy Actors may have already shown up. Or maybe not - Especially if you don’t live in North America. At the time of this writing, there still hasn’t been word on how international viewers will get to watch Trek’s first comedy series. On Friday July 31st, Twitter Tweeter @Nottinghillnerd Tweeted

to which showrunner McMahon replied

So since LAST Friday, there hasn’t been any further news. But there may be after August 4th but before August 7th.

Do you like Trek T-shirts? Subscriptions? Exclusivity? Then “Star Trek: Lower Decks” and Animation Production House and T-shirt Company Titmouse have a deal for you! Behold “the Lower Deckers Shirt Collective Subscription”

Announced on Friday July 31st, the subscription service will feature 10 t-shirts - one for every episode of “Lower Decks” - designed by the team at Titmouse. For 180 US Dollars, residents of the United States and Canada will receive all 10 offerings, plus a free members-only eleventh. If you aren’t sure you want that many pieces of wearable Titmouse art, you can order one at a time for 20 US Dollars - but remember, you’ll forfeit the member exclusive.

Don’t have the money now but you want the shirts? Well, unfortunately, that may prove to be a problem. To quote the Titmouse website ”When the new episode airs, the previous week's shirt style is GONE. No more. Nuh uh. Byeee. Don't look back. The only way to go now is forward.”

In an interview with Star Trek.com to announce the subscription, Titmouse Director Barry Kelly said of the design process ”We try to find that little nugget of an idea that sparks a design. Could be a logo in the episode, could be an iconic shot, or just a random prop in the background could make a funny and iconic shirt.”

“As preparations to toast the legendary James T. Kirk get underway, the personal effects gathered to help pay tribute begin to change or disappear! Can you determine what kind of temporal disturbance is causing this before Kirk himself vanishes?”

Get ready to party like it’s 2019, 2268 and 2404 at the same time, captains. From August 6th to 10th, Star Trek Timelines is reprising its “Legend Unwritten” Galaxy Event from March of last year for the Federation and Augment factions. This time around, the ranked reward will be the new 5-star EV Suit T’Pol;  last week’s ranked reward crew Technician Fisher joins 5-star Captain Harry Kim, 4-star 1701 Jadzia, and 4-star Evil Kirk as the event crew. At least, we’re pretty sure it’s Evil Kirk. None of them are wearing name tags.

The official Star Trek Timelines Twitter account also announced the upcoming Enterprise Vacation Campaign, starting August 6th. Although details on the event remain scant, we do know it will feature Enterprise’s Lieutenant Reed and Commander Tucker as we saw in the episode “Two Days and Two Nights”. Probably not all of how much we saw them, though.

Star Trek may take place in an idealized future, but its gaming franchises continue to recognize the needs of the many today. Until August 19th, Humble Bundle and Modiphius Entertainment are offering a Star Trek Adventures RPG Book Bundle in support of the NAACP Legal Defense Fund. Purchasing the bundle at the top $15 tier unlocks the Federation core rulebook, expansions, pregenerated adventures, canon character sheets, and even a 50% discount off the core rulebook print edition. As of writing the Bundle has raised $144,510.12 from 9,042 purchases.

The Hunt Is On With Roddenberry And Sansar

Back in episode 467, we let you know about an upcoming virtual scavenger hunt sponsored by Roddenberry Entertainment, in partnership with Sansar. Well, Captains, the hunt has begun! Since July 28th, Sansar has been dropping regular clues to the mystery on its social media channels. The first clue was “We’re FLOATING with excitement to start off the Roddenberry Recovery Mission” The next clue was “We’ve got brews for you, on this Skyway Avenue.” Then came the clue, “You’ll need to grab yourself a cup of Mokah to get energized!” And, after the weekend break, yesterday’s clue was “After finding this clue, you may need a shower; it sure is a SANDY Sansar day.” To Trek out every day’s clue, just follow Sansar and Roddenberry Entertainment on Twitter.  And to track down the missing items, and maybe win an Oculus Rift S VR Headset (among other prizes), head into the worlds of Sansar and follow the trail. You don’t even need VR to play, thanks to a desktop-only PC client option. Good hunting, Captains! 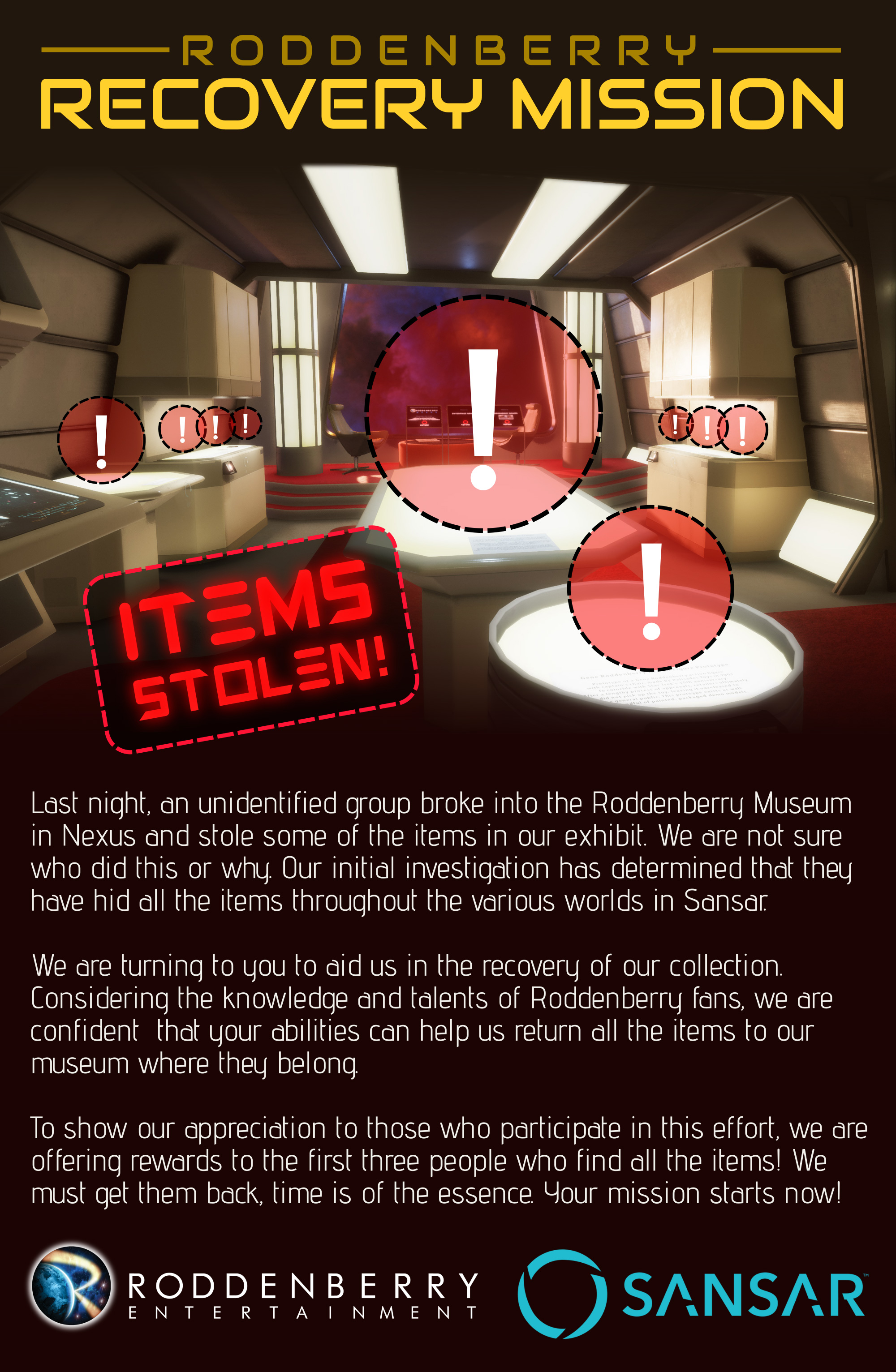