This week on Episode 471 of Priority One --- We ‘Trek Out’ San Diego’s Virtual Comic Con including Discovery’s hope, Lower Decks clips, Progress on Strange New Worlds, and P-Stew! In Star Trek gaming, we share with you which game developers are taking actions for a more equitable future.

CQ:  What was your favorite news to come out of the SDCC@Home?

What a strange year 2020 has been. The US and Iran almost started World War III, there’s a global pandemic, giant murderous hornets - aptly named Murder Hornets - were big news until they weren’t. Civil unrest, an economic rollercoaster, an oily island that drives men mad, social distancing. Wild stuff. So in this weird-and-wild world of social-distancing and goatees-for-all, what of convention season? You may be surprised to learn conventions have, in fact, continued - Sort of.

While some promoters have postponed their events until smack-dab-in-the-middle of the predicted second-wave of Covid-19 *Cough*Creation*Cough* Others have decided to take their stage digital - including arguably the biggest Geek-Con in all the world - San Diego Comic Con. This week, the mega-event streamed its much anticipated panels via the internet, teasing fans everywhere with what is to come in their favorite fictional universe - and ParamountCBS’ Star Trek set the pace.

On Thursday July 23rd, the showrunners and stars of Star Trek’s newest offerings pulled up their favorite chair and shared thoughts about what has happened - and what is to come - in their respective Star Trek offerings. We are going to cover SDCC20 a little different than we have in previous years because - well - it was a little different.

It seems only apt that we cover Star Trek’s first “NuTrek” offering - Star Trek: Discovery - at the start. Before the Q&A, Discovery’s showrunner Michelle Paradise led Executive Producer/Director Olatunde Osunsanmi  and the cast of Discovery season two -including most of the bridge crew as well as Anson Mount, Ethan Peck, and Rebecca Romijn - in a table read of the Discovery Season 2 Finale, “Such Sweet Sorrow, Part 2”. The read was edited, so it played very tightly, and was interspersed with early special effects layouts and storyboards of some of the action sequences. It was a fun introduction, to be sure, and it was great to see the acting chops of the cast sans costumes, sets, and makeup. But what about Trek nuggets? Oh - there were trek nuggets.

While the Q&A was interesting - revealing a POSSIBLE return of more Kelpians, and verification of a stronger romance between Stametts and Culber - possibly the biggest Discovery Season 3 news dropped a few days after the panel. On July 27th, the team released a short video of Burnham holding a tattered Federation flag, which ended with a panel that read “Star Trek: Discovery. New Season October 15”. We have a release date!

Ending the Star Trek Universe Panel, but coming in number two here on Priority One, was the cast of Star Trek: Picard. Frankly, very little was said about the upcoming season, and it was - in large part - a rehash of things we’ve already covered. The cast was in awe of Sir Patrick, it was nice for the Next Generation alumni to reunite, both Sir Patrick and Brent Spiner were reluctant to return to the roles...et cetera, et cetera.  As always though, it’s fun to watch the banter and admiration of the cast, and Sir Patrick even earned a couple of new nicknames - SPS and P-Stew.

Despite the lack of new information coming from the virtual panel, there was some fun news that came a few days BEFORE the convention - Star Trek: Picard is getting a physical medium release!  Announced on July 21st, Picard’s premiere season will be available on DVD, BluRay, and Limited Edition Steelbook on October 6. Included in the release will be the first ten episodes of the season, documentaries, commentary, deleted scenes, and the Short Trek “Children of Mars”. At the time of this writing, the DVD can be preordered for 37.34 US dollars and the BluRay for 47.99 US dollars at Amazon.com

As we mentioned in our first story, the upcoming “Strange New Worlds” leads joined the Discovery cast for a table read and Q&A. As expected, they discussed how Discovery’s second season adventure would affect their characters in the upcoming series - but we’ll get back to that.

Leading into the table read, Star Trek’s Meta Captains - Alex Kurtzman and Heather Kadin - delivered a bit of excitement. In introducing Strange New Worlds, Kurtzman revealed that the team was working on the series as far back as last SDCC. Kurtzman then gave some progress on where “Strange New Worlds” was, production wise.

Meanwhile, back at the panel the trio of Mount, Peck, and Romijn discussed Discovery’s effect on their upcoming roles.

Finally, the panel covered Star Trek animation! The Star Trek: Lower Decks panel was moderated by series creator and showrunner Mike McMahon, and started with a clip. It begins, much like the teaser, with Boimler’s “Captains log” being interrupted by the loud and spunky Ensign Mariner - who turns out to be celebrating shore leave with a bit of libation. The comedy is cartoony, but with a Star Trek backdrop! After the clip, we are introduced to the voice talent, each describing their characters, what they love about the show, and a BLEEP ridden segment that tones out the spoilers they’re spilling. You can Trek out 16 new images of the series at Treknews.net! 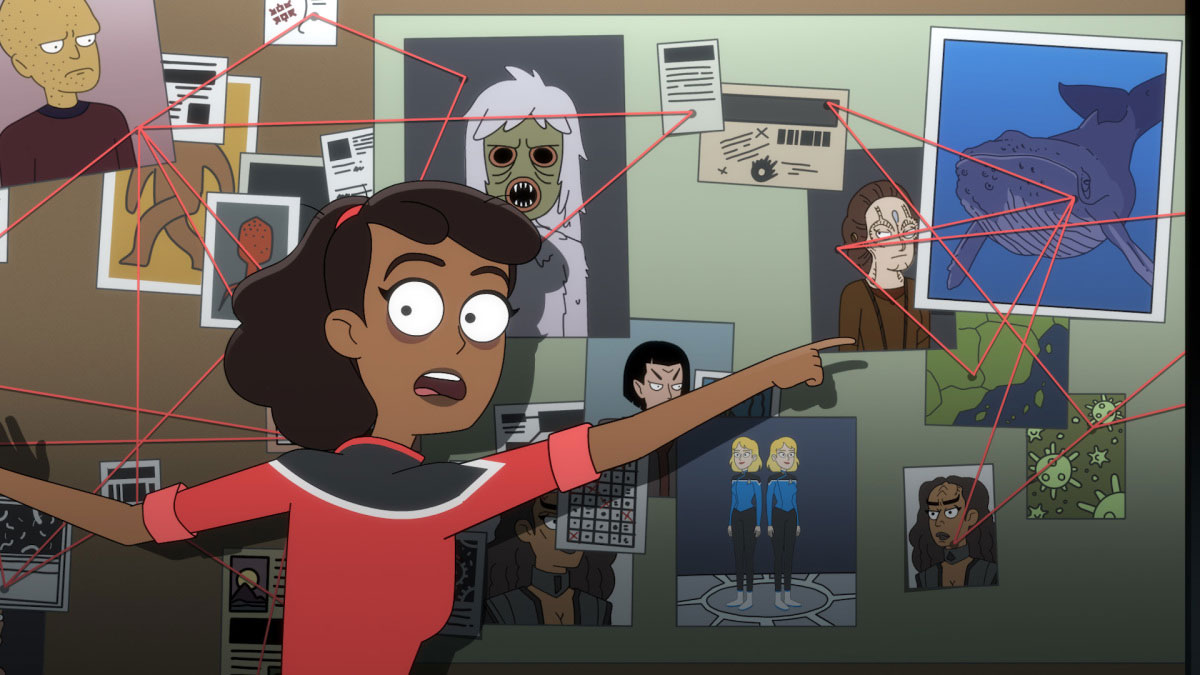 But we said the panel covered Star Trek ANIMATION, not Star Trek LOWER DECKS. So what does that mean? Well, we finally know a bit about the upcoming Nickelodeon series! After Kurtzman discussed Strange New Worlds, Kadin talked a bit about the new animated project “Prodigy”. In an announcement on Star Trek.com ”Nickelodeon and CBS Television Studios today officially revealed the title and logo for its all-new animated series Star Trek: Prodigy, which follows a group of lawless teens who discover a derelict Starfleet ship and use it to search for adventure, meaning and salvation.”. The show is vaguely expected in 2021.

The leadership, cast, and crew of Star Trek spent a good deal of time talking about Star Trek’s importance, and what makes it relevant today - Inclusion, Respect, Equality. Prior to the Discovery panel Sonequa Martin-Green announced an important message regarding the NAACP Legal Defense Fund. If you wish to donate to the NAACP Legal Defense Fund, please follow the link. Thank you

This Week in Trek History

To the outside world it was July 28th, 1965, but on a soundstage in Culver City, it was stardate 1313.8. “Where No Man Has Gone Before,” the original Star Trek’s second pilot episode, finished principal filming as Captain James T. Kirk buried a new god under a phaser-triggered rockslide on the surface of Delta Vega. Presumably he had time to put a clean, unripped shirt on before producer Lucille Ball’s wrap party. The people of Earth would first see Kirk’s friendship with Gary Mitchell come to its tragic end over a year later, when “Where No Man Has Gone Before” hit terrestrial airwaves the following September.

Star Trek Timelines Event: “No Trouble At All”

Some secrets should never be known. Some life should never be sought out. And some organisms shouldn’t be spliced with human DNA and turned into the most horrifying breakfast cereal of all time, LIEUTENANT. Section 31, the Borg, and the Klingon Empire are punting all ideas of ethical scientific research out the airlock in Star Trek Timelines’ impending “No Trouble At All” Faction Event. Kicking off on July 30th and running through August 3rd, the event will feature the new 5-star Technician Fisher from the original NCC-1701 as its ranked reward. Event Crew includes last week’s 5-star faction reward Dr. Edward La Forge, the new 5-star Mother Horta, and the scourge of the Cabot himself: the 4-star Edward “Idiot” Larkin. It is the official position of Priority One Productions that Lieutenant Larkin and the Mother Horta must be kept as far away from each other as our understanding of spacetime allows.

The command track in Starfleet can take you very interesting places. You might become best friends with a neural parasite, a smear on the side of a Borg cube, or patriarch of the Arakawa yakuza clan. Probably not all at once, though. On July 22nd, the Reno Gazette Journal published an interview with the 83-year-old actor, activist and Star Trek icon George Takei about his voice acting role as criminal patriarch Masumi Arakawa in the upcoming Yakuza: Like a Dragon video game. Takei explains that his motivation for the role comes from his fascination with modern yakuza culture and its samurai roots, saying “Here is this man who, at his core, is a decent human being who lives within that culture and expects that same kind of fidelity. Some aspects demand inhumane fidelity to that code and it's a shared understanding”. Takei also talks about his early life as a Japanese-American in the midst of World War II, and how his admiration for the benshi narrators of silent film lead to his careers in voice acting, theater, and far beyond the stars.

Yakuza: Like a Dragon will be available for Xbox One, PS4, and Windows PCs this November.

Are you feeling let down by the inferior minds of Spock, Data, Reginald Barclay, and their intellect limiting Three-dimensional chess? Bored with the Aldabren Exchange and the Kriskov Gambit? Well, then maybe the new 5D Chess with Multiverse Time Travel would be more challenging! The new game, released on Steam by developer Thunkspace, might not be a part of Star Trek, but somehow we think Trek’s great minds would approve. The rules for this brain-breaking chess variation begin from the standard chess rules and standard chess board. Then you introduce the ability to time travel your pieces, creating a multiverse timeline of alternate boards, and things get crazy. We’re talking enough temporal mechanics here to drive Miles O’Brien to distraction. They even introduce a couple of new pieces entirely dedicated to time-travel movement, the Unicorn and the Dragon.  Read some of the Steam reviews of the game, and it feels like Q himself might find this game worthy. For example, one top review reads “I was playing a game against a human opponent online, and at one point they sent a queen back in time from one of the ten timelines currently in play to put five of my past kings into check at once. I sent one of my own pieces even further back to stall, and they proceeded to send one of their queens back to the start of the game to try and beat me before I even got to that point.” Captain, if you’re curious, Trek it out on Steam now!